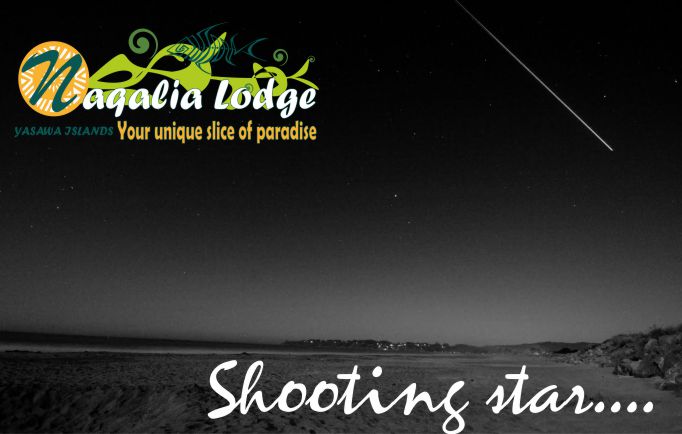 Shooting star is a common name for the visible path of a meteoroid as it enters the atmosphere, becoming a meteor. Shooting star is a wish. Shooting star is the good excuse to enjoy the night on the beach. After an amazing dinner , everybody will go to the beach for bonfire . The flame and the sound of the waves. And then the fire will slow down and the sky is taking his place , like the main actor of the night. Quite , silence , peace .One by one sometimes more than one they will cut the sky ; the shooting stars….After few hours you will lose your counts … crazy good .. The sky of Fiji. Thousands of stars , planet and the milky way, the southern cross, scorpion, Pegasus and much more … The sky looks not so far on the beach of Naqalia Lodge. At certain times of year, you are likely to see a great number of meteors in the night sky. These events are called meteor showers and they occur when the Earth passes through the trail of debris left by a comet as it orbits the Sun. These showers are given names based on the constellation present in the sky from which they appear to originate. For example, the Leonid Meteor Shower, or Leonids, appear to originate in the constellation Leo. It is important to understand that the meteoroids (and therefore the meteors) do not really originate from the constellations or any of the stars in the constellations, however. They just seem to come from that part of the sky because of the way the Earth encounters the particles moving in the path of the comet’s orbit. Associating the shower name with the region of the sky they seem to come from just helps astronomers know where to look!