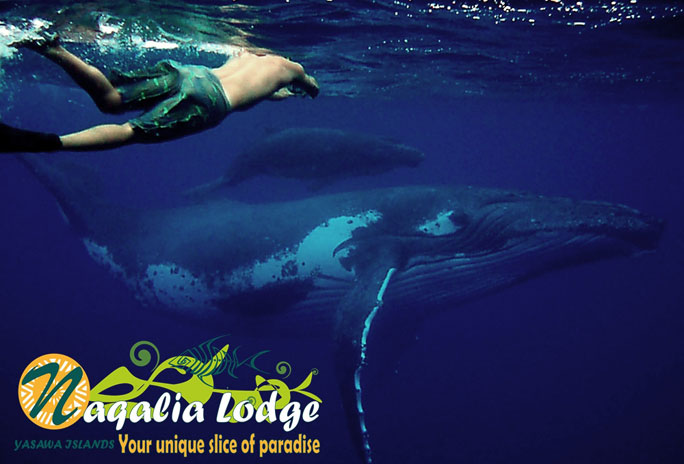 The intriguing and charismatic Humpback Whales have chosen the Fijian waters for calving and breeding. Generally they arrive in early July to the tropical waters of the Pacific Islands and remain four long months until end October or November. Thereafter the whales start their 6 – 8 weeks long migration towards colder and high productive waters around Antarctica. Here they feast on their preferred pray of large swarms of krill for other 4 months until they commence the annual journey and return to their breeding grounds of the Fiji water.

The Oceania Humpback whales subpopulation is listed as Endangered on the IUCN Redlist. If you belong to the fortunate people to sight one of those extraordinary animals in Fiji waters please do report to the Fiji Fisheries Department who runs a national database to collate all of the sightings. It would be helpful to notice the geographic position (long, lat) of the sighting and the group composition of the whales, such as the number of sighted whales and if the group is composed of calf and mother for example. Your information will help to learn more about the distribution, movement patterns and presence of calves and with the final scoop to protect and better safeguard the Humpback whale population in the Fiji waters.

The whales are not only fascinating animals but also are ecosystem engineers; they help maintain stability and health of the oceans and they even provide services to human society. Such ecosystem values are the horizontal and vertical essential nutrient cycling, critical for the oceans resiliency. As the whales dive to depth for feeding and surface for breathing, they release enormous fecal plumes, transporting essential nutrients, which stimulate the phytoplankton growth being the base of all marine food chains. And as the whales migrate from productive, nutrient rich feeding areas to less productive, nutrient poor calving or breeding areas, they help to sustain the horizontal nutrient cycle. Even after their death, the rotten carcasses sink partially in one of the largest quantities of detritus and the rest provide fest for hundreds of species in the depth. The dead whales function as a climate friendly carbon trap: as the carcasses sinks they transport enormous amount of carbon equivalent of that produced by 80 thousand cars per year from the atmosphere into the deep ocean.

Categories: Activities travelling around the world